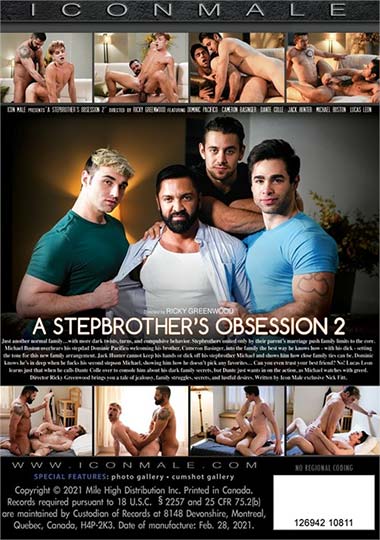 Description:
Just another normal family… with more dark twists, turns, and compulsive behavior. Stepbrothers united only by their parent’s marriage push family limits to the core. Michael Boston overhears his stepdad Dominic Pacifico welcoming his brother, Cameron Basinger, into the family the best way he knows how – with his dick – setting the tone for this new family arrangement. Jack Hunter cannot keep his hands or dick off his stepbrother Michael and shows him how close family ties can be. Dominic learns just that when he calls Dante Colle over to console him about his dark family secrets, but Dante just wants in on the action as Michael watches with greed. Director Ricky Greenwood brings you a tale of jealously, family struggles, and lustful desires.