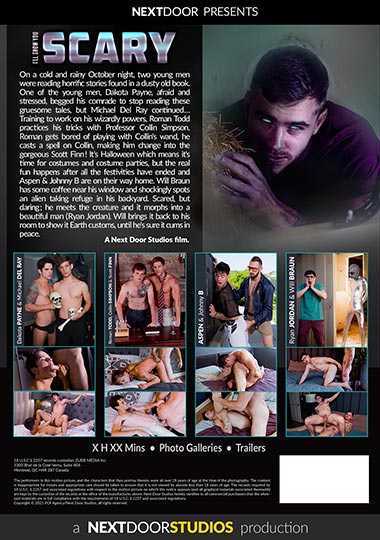 Description:
On a cold and rainy October night, two young men were reading horrific stories found in a dusty old book. One of the young men, Dakota Payne, afraid and stressed, begged his comrade to stop reading these gruesome tales, but Michael Del Ray continued… Training to work on his wizardly powers, Roman Todd practices his tricks with Professor Collin Simpson. Roman gets bored of playing with Collin’s wand, he casts a spell on Collin, making him change into the gorgeous Scott Finn! It’s Halloween which means it’s time for costumes and costume parties, but the real fun happens after all the festivities have ended and Aspen & Johnny B are on their way home. Will Braun has some coffee near his window and shockingly spots an alien taking refuge in his backyard. Scared, but daring; he meets the creature and it morphs into a beautiful man (Ryan Jordan). Will brings it back to his room to show it Earth customs, until he’s sure it cums in peace.