Learning To Play Together 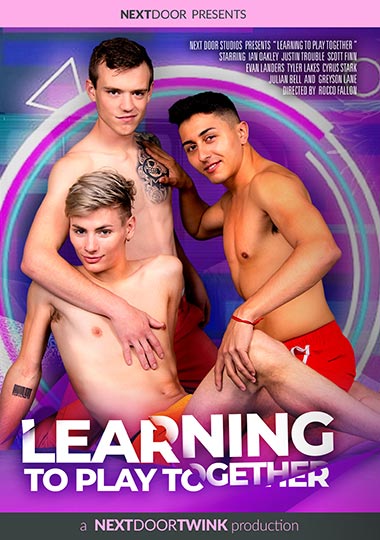 Description:
Ian Oakley invites Justin Trouble over for some fun. They start to kiss, but Justin isn’t feeling well. He’s in need of something sweet, and Ian has just the right thing… a cake pop! Young loves Scott Finn and Evan Landers both have big plans, but their plans threaten to tear apart their love. Scott’s decision to go into the military causes Evan to erupt with jealousy and Scott leaves, sad and dejected. But the next day, Scott shows up in his military gear, and Evan can’t hide how turned on he is. When his step-brother asks him if he wants to join in on a threesome, Scott Finn isn’t sure if he’s being put on. But Tyler Lakes isn’t the jealous type, and besides, he knows Cyrus Stark is a hot piece of ass that can’t be contained, so he might as well go with it. Greyson Lane has mixed reviews for his first Pride Parade. On one hand, he had a great time and was happy to participate. On the other hand, he’d have liked to ‘participate’ with a few hot guys to celebrate the event. Buddy Julian Bell tells him he could help him out with that request.