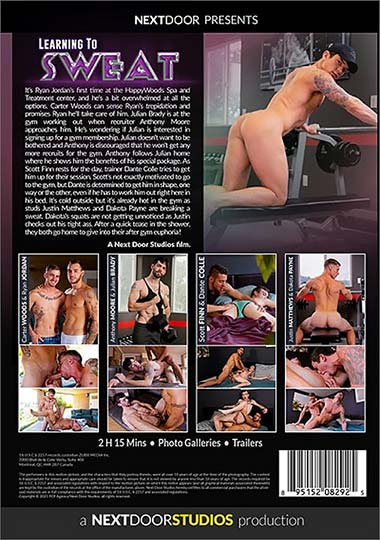 Description:
It’s Ryan Jordan’s first time at the HappyWoods Spa and Treatment Center, and he’s a bit overwhelmed at all the options. Carter Woods can sense Ryan’s trepidation and promises Ryan he’ll take care of him. Julian Brady is at the gym working out when recruiter Anthony Moore approaches him. He’s wondering if Julian is interested in signing up for a gym membership. Julian doesn’t want to be bothered and Anthony is discouraged that he won’t get any more recruits for the gym. Anthony follows Julian home where he shows him the benefits of his special package. As Scott Finn rests for the day, trainer Dante Colle tries to get him up for their session, Scott’s not exactly motivated to go to the gym, but Dante is determined to get him in shape, one way or the other, even if he has to work him out right here in his bed. It’s cold outsiide but it’s already hot in the gym as studs Justin Matthews and Dakota Payne are breaking a sweat. Dakota’s squats are not getting unnoticed as Justin checks out his tight ass. After a quick tease in the shower, they both go home to give into their after gym euphoria!