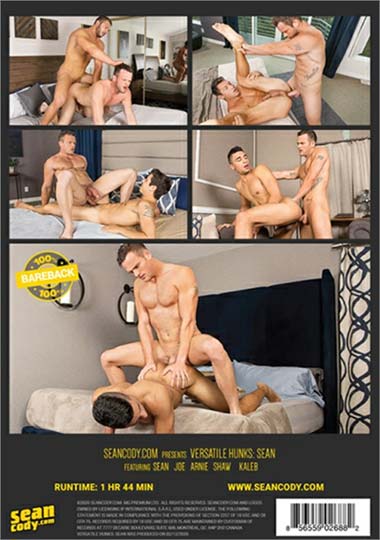 Description:
“You know I have a big dick, right?” Sean set the mood for the rest of the day, and Joe laughed nervously. “Oh shit!” Even though there was a bit of nervousness, he was confident that he could take it. Sean was impressed with his confidence, so he gave Joe a good, hard pounding that he won’t soon forget! Muscle top Arnie and eager bottom Sean go at it in this sweaty, cum-filled scene. Sean’s hole was hungry for a pounding, and Arnie took that ass and made it his own, shooting his load all over the place! Shaw heard a lot about Sean’s assets, and looked wide-eyed at his bulge, “I got a little bit of Italian, but not that much Italian!” Sean assured him, “Well, you’re about to get that much Italian!” In the car on the way to the house, the two muscle studs started with some show and tell, clearly hot and bothered, but once we arrived, the rough play was in order. Sean dominated Shaw’s ass, and both hotties were left satisfied. The first thing you notice right off the bat is that there is a significant size difference between Kaleb and Sean, but that didn’t stop Kaleb from doing what he wanted to do. When we asked him what he was looking forward to doing to Sean, he answered “I just wanna make him feel good.” Even though Sean was the bottom, his aggressive and dominant personality shined through, but Kaleb did exactly what he set out to do!